A recent article in Total Retail took an analytic eye to marketing to Generation Z (those born between 1997 and 2012).

"Like Millennials before them, Gen Z has become the subject of a number of opinion pieces in which industry analysts complain about their lack of loyalty and obsession with value. “They don’t want to pay full price for anything,” comments a consultant in this Business Insider piece on Gen Z shopping habits. In the same article, an executive director at Ernst & Young laments, “There really isn’t loyalty like in the past.”

Generational grumbling can be chronicled back into ancient times. It can be amusing. But please understand that “Get off my lawn” will not be a productive retail strategy.

Do we have your attention now? That number doesn’t include the strong influence of younger but tech-savvy Gen Zers within their families. And in three years, Gen Z will make up 27 % of the workforce.

What matters for retailers is anticipating evolving generational wants and needs from all customers — young and old — and serving them.

And there’s plenty of notable generational intersection. For example, authenticity. Here’s another recent article of note. A Wall Street Journal headline asked a question few of us probably saw coming: “What Happened When the Olive Oil Startup Apologized?”

The subhead was a bit of a spoiler — “The CEO told 35,544 customers he was sorry. It worked” — but the story itself provided deeper truths about the changing marketplace, particularly among younger consumers.

[CEO Andrew] Benin believes in communicating like a person, not “as a business, with a business tone,” which became obvious to anyone who opened his apology email. And there were quite a few. The average open rate of Graza’s regular marketing emails was already exceptionally high at 58%. This one reached 78%.

As Benin is 30, he’s a younger member of the Millennial generation, but the success of his note — particularly its authenticity — speaks to what’s next for retailers trying to wrap their arms around the quirkiness of Gen Z.

It was recently observed to a Gen Z representative that his demographic group owned perhaps the shortest attention span in history — eight seconds!

The object of this retort decided not to take it personally, and it might just be a fair point. Gen Z is the first generation to grow up entirely with smartphones and social media as part of its daily life. If you want their attention, you must find ways to engage them and do so quickly.

What does Gen Z want?

These focuses are not unique to Gen Z, but they do intersect with Gen Z in distinctive ways.

That 63 % of Gen Z purchased an item they had previously seen on their social media feed is striking. It means retailers who aren’t strategically embracing social media and influencers will get left behind, though it is notable that interpretations of Gen Z are often different. McKinsey reported that “40 % of adult Gen Zers… say their purchasing decisions are most influenced by social media.”

But Sara Lebow of Insider Intelligence makes an interesting point about reacting to numbers, adapting slowly and then becoming complacent:

“…newcomer BeReal already has 34% of U.S. teens using it just as often [as TikTok], according to Piper Sandler.

Young people are not waiting for legacy platforms to catch up to the latest trends. They’re looking for new ways to reach friends and discover products, giving brands a wide array of opportunities to reach this demographic.

Social media is a hyper-dynamic medium, one that can create powerful viral messaging that can end up being positive or — yikes — extremely negative. Further, it’s anything but siloed, as its intersections with gaming, the Metaverse and influencers are a part of the complex online ecosystem that retailers want to engage.

First, understand that gaming and eSports aren’t just hobbies or escapes. It’s a lifestyle, one that is expected to reach a value of $339 billion by 2027. That’s why brands such as Nike, SEGA, Sony Music, Kellogg’s and the NFL, among many others, have launched game experiences on Roblox to market products or simply enhance their visibility to new customers. Or why a powerful, aspirational brand like Gucci helped sponsor a “Gaming Academy.”

Further, brands that want to engage Gen Z will need to know which influencers already own that territory, at least for now. Sometimes those are celebrities acting as brand ambassadors. But often they are other Gen Zers who have organically gained a following.

Gen Z seeks communities online, and brands don’t typically lead these communities. They get invited, even if that acceptance happens after a paid endorsement.

To envision the big picture here, consider Chipotle. It was an early innovator with TikTok — first restaurant with over one million followers — and Roblox, but its digital strategy is evolving. This is due in large part to the leadership of Candice Beck, Chipotle’s director of social, influencer and Web3, who described her group to QSR Magazine as a team of “culture hunters.” 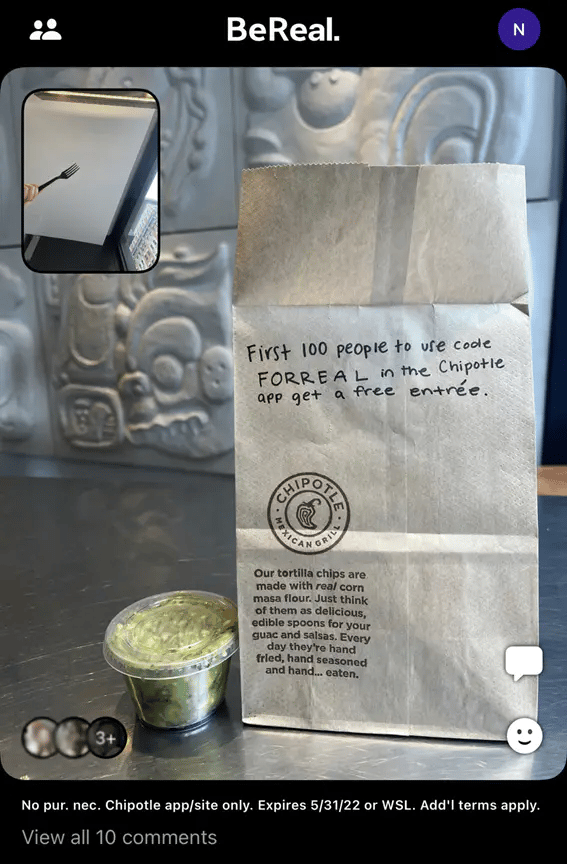 So, after being bold on TikTok, Chipotle jumped into BeReal with both feet, real and avatar.

“We saw incredible potential with being an early mover on BeReal and tapping into the Gen Z audience,” Beck told Nation’s Restaurant News. “We aim to meet our fans where they are.”

Augmented Reality, the Metaverse and… stores

No surprise that “what’s next?” technologies fascinate Gen Z. One recent survey showed that 90 % were interested in using AR to see what a furniture piece will look like in their living space, while 37 % indicated that they would be interested in attending a virtual concert of one of their favorite musicians.

But consider those numbers. One is a highly practical use of AR (furniture). The second is an entirely new, immersive virtual experience. One augments the in-store shopping experience. The other, decidedly less popular, replaces an in-person event.

This distinction is notable for retailers because Gen Z likes technology, but it also likes going to stores, per McKinsey:

They like brick-and-mortar stores: In a sense, members of Generation Z are always shopping, because they are always connected. They buy on any device and in any format or channel. At the same time, they are surprisingly old school. They are much more likely to shop in physical stores than are Millennials, who were the first generation to grow up with online shopping and who are more likely to shop that way.

Gen Z personifies the long-predicted omnichannel shopper, but the twist is they enjoy the experience of physical stores, even more in some cases than older generations of shoppers.

Of course, the in-store experience is also evolving because it can’t solely rely on conventional, tactile experiences with products to drive traffic. It needs to incorporate the social and omnichannel offerings in-store in every way possible, accommodating present wants and needs while also trying to anticipate their future evolution.

As Beck observed, “We aim to meet our fans where they are.”

End-to-end branded environment services under one roof to craft the optimal customer experience wherever people gather, shop or learn.